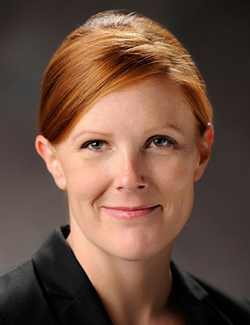 Our Medical Director - Kerry Ahrens MD, MS
I am a Wisconsin girl born and bred lived in Delavan, Wisconsin until college. I graduated from the Medical College of Wisconsin and did residency at UW-Madison Hospital and am a specialist in Emergency Medicine. I primarily caring for patients at AuroraBayCare in Green Bay and Oshkosh Wisconsin.

I wear many hats; in addition to Gillett Area EMS Service, I serve as the medical director for Oshkosh Fire Department and several volunteer departments including Omro, Winneconne, Algoma, and Van Dyne. Additionally, I am a flight physician for UW-Medflight.

Currently I reside in Region 6 of Wisconsin and sit as a member of the Region 6 RTAC board and am the medical advisor for the Region 6 Healthcare Emergency Response Coalition (HERC). I remain active in my specialty and am president-elect for Wisconsin American College of Emergency Physicians (ACEP) chapter. Lastly, I have a passion for stroke management and sit as the Co-Chair of the Wisconsin State Stroke Coalition. 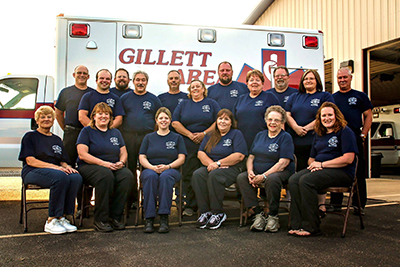 Gillett Area Ambulance Service has provided an ongoing Community Service for almost 55 years, ever since 1955 when members of the Gillett Civic Club recognized the need for a rescue squad and trained some of their members in Advanced First Aid. A donated panel truck carried equipment, and rescue operations began in 1957. In the early years, patients were transported in the local hearse, as was the case in many communities. Later a larger truck was purchased, which was capable of transporting patients as well as carrying equipment. After passage of the National Highway Safety Act of l966, Wisconsin began to upgrade pre-hospital care standards, and began training Emergency Medical Technicians. Many Rescue Squad volunteers were among the first in the State to become EMT’s. In l973, Gillett Area Ambulance Service was incorporated and the Rescue Squad became part of the ambulance service.

Many new skills have been added over the years, along with a variety of new equipment, to help us better serve the people of the area. Today, as always, members continue to upgrade their training thru refresher classes, seminars and training sessions. Over the past few years, a group of EMT’s have been trained to administer IV’s and related therapies. GAAS, Inc. is proud to be providing this higher level of care to the people we serve.

Gillett Area Ambulance Service presently serves the City of Gillett, Village of Suring and Towns of Breed, Gillett, Green Valley, How, Maple Valley, Underhill and Spruce. Three modern, fully equipped ambulances are available to transport patients, from our main station on Park Street in Gillett. A rescue sled and all-season ATV are available for snowmobile or ATV accidents, as well as providing access to someone who may have been injured in the woods, a farm field, or other areas not easily reached by the ambulance. 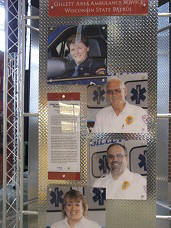 Congratulations to the GAAS Inc. EMS Personnel Julie Yonker, Donnie Hinkfuss and Kevin Kissel for being featured in the Bellin Health and Green Bay Packers, "Make The Right Call, 911" campaign.

A law enforcement officer approaching a vehicle has to be ready for anything. On March 6th, 2010, State Trooper Joan Timm pulled over a vehicle for speeding only to discover the women was rushing to seek medical attention for her husband, who was displaying symptoms of a stroke.

Although the couple did not use the 9-1-1 system, Trooper Timm made the right call for them, radioing the Oconto County Sheriff’s Department 9-1-1 Center which then dispatched Gillett Area Ambulance to the scene, which was several miles away.

Shortly thereafter, the man began having what appeared to be a seizure, rendering him unresponsive and without a pulse. Trooper Timm continued to relay information to the dispatcher while moving the man outside of the vehicle and onto the shoulder of the highway. She placed an oropharyngeal airway, a device to restore a clear flow of air, in his throat and began to perform CPR.

With relayed information from dispatch, Gillett Area Ambulance personnel knew this would be a “load and go” upon arrival. The patient was quickly secured in the back of the ambulance, where CPR continued en route to Shawano Medical Center. EMS professionals were able to regain a pulse and respirations, and the man began speaking to them as they arrived at the hospital.

YEARLY FACTS ABOUT US